Progress on The Flamingo, A monster, A Little Book and Some Eggshells

I said I was going to make a flamingo out of paper mache.
Here's some progress made!
He's still a LONG ways to go before he's done!
I'll carve some styrofoam into a beak shape to add to his head and I'll have to figure out his legs and feet when the time comes. At the moment he's nothing more than that paper reed armature and plastic grocery bags taped on it. I cut his neck and head off before adding the plastic bags and repositioned it. That neck still isn't quite right, but it's going in the right direction. Some more surgery may take place in the next few days. We'll see. 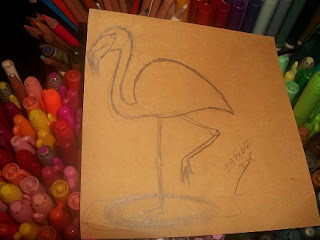 My reference drawing to keep the flamingo looking somewhat like a flamingo.
Pencil on orchard paper. 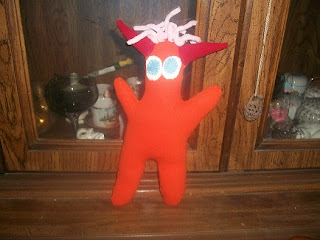 Here's that monster you all saw in pieces yesterday.
He's not my favorite by any means! I think he'd look a lot better without that pink hair but the hair was needed to cover up my shabby sewing job when I sewed him closed after stuffing him!
He's about 8 inches tall. I used that orange polo shirt for his body and the collar from that shirt for his eyes along with a bit of blue felt. His horns are red fleece from an old shirt. He's sewn with orange and red crewel embroidery yarn and white crochet cotton string. 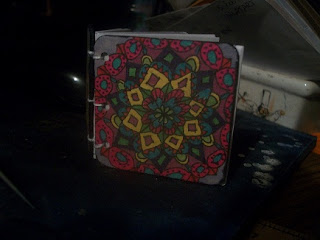 Here are both the covers for the Mandala Book.
2 inches square, drawn with markers on orchard paper and then adhered to the thick chipboard tiles from a kid's memory game.

This is eggshells, stickles and black marker on orchard paper.
It folds into threes becoming about 3.5 inches square. It's glued to green scrap book paper, white on the backside where the drawing is glued.
I'll be doing something with eggshells again as I saved the remains of my supper last night! I have four eggshells all cleaned and ready for creative purposes. I used less than half of one eggshell for the flowers on the cherry blossom drawing.

Expect to see stars in the next post!
Maybe another monster as well. But if truth be known, I'm kinda sick of monsters right now.
And I'm really bored with Polish Stars so those won't be showing up too frequently right now. I still have enough circles cut to make another dozen or more Polish Stars so there will be more of those in the future.

Be good to one another!
It matters!
Peace, Friends!
831