We will have art today! Yeah!!!!
The inchies that follow were done in the last week of December. The Orange Star was done by daughter-in-law, Lue and the rest are mine. I still have another batch of inchies to scan but gave up on the inchies because it took three tries to get these 12 scanned with all 12 of them in the frame! Don't know what the devil was the problem that the left hand column got cut off on those first two scans. But here they are... new inchies to look at! 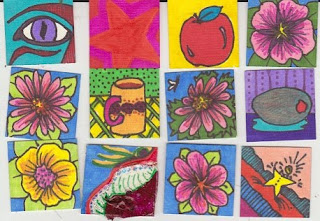 I am thinking highly of joining the 365 Day Challenge...I'm not sure that is exactly what it is called...anyway the idea is to do 1 ATC a day for 365 days. I missed out on the first two days of the new year. No new ATCs made those two days...but there's one for each of the days since. They aren't all here, but there is one for each day since the 3rd of Jan. I still have to scan the January 6 card. 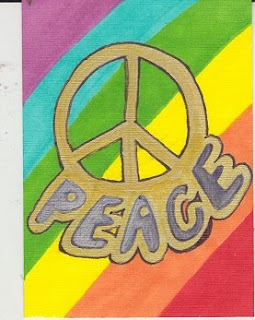 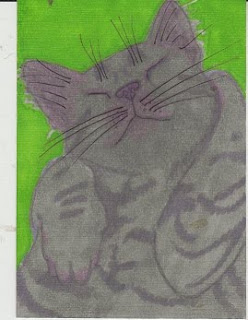 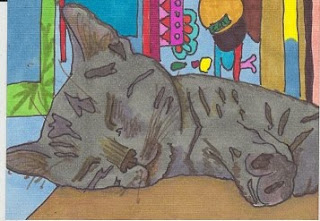 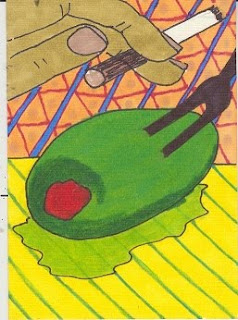 5 January 2010
A Hangover In The Making
markers on recycled cardstock
Looks as though I did two on the 5th of January. Does that put me ahead of the game??? I don't think it matters if you make one or twenty three of them on any given day, the goal is to do ONE a day.

Seems I finally figured out that scanner. No new drivers to upload thankfully. I really thought it would be harder! I just tried to use the scanner to see if it would work and voila! Yep, works great! Works different than it did with Windows XP, but not so different that I couldn't figure it out!
It's snowing as I type out this entry. All the critters have opted to stay inside for today. Billy cat hasn't been out for any length of time in a few days. It's terribly cold out! The temp is in the low 20s but the windchill is down in the single digits...Ma said the TV said the windchill was sitting at a whopping 4F about 20 minutes ago. The wind is terrible! Straight out of the northwest. That open field to the north of the house leaves nothing to block the wind so it's coming in gale force, it seems. Not sure what the wind speed is, but the roof is making all kinds of racket from it. A metal roof does make a lot of noise in the wind and the stronger the wind, the louder the noise! I don't know how much snow accumulation there is to be. Ma said a trace to an inch... looks like we've surpassed the inch mark already though. The rug on the ground at the bottom of the front steps is covered now.
It's perfectly OK with me if it snows bunches! I have no plans to travel any farther than my sister's house next door. I will have to hoof it to Susan's if I decide I need to get out, but I've done that so many times I could close my eyes and get there quite easily. A bit of blowing snow isn't going to deter me. It's the wind that might keep inside where it's warm.
Today I am working on some swap obligations. I entered the Matchbox/Little Book Swap over at AFA (the link's still up there in the left hand corner). The idea of this swap is to make a little book that fits nicely in a 32 count matchbox. I made a lovely little green book to fit in a matchbox earlier today. Only problem is that even though the book is TINY, it's not tiny enough to fit in that matchbox. So back to the drawing board to make an even tinier book.
In making that little green book, I learned how to do long stitch binding. My attempt was a little loose but the next book, the binding will be tighter and it will fit in a matchbox! It has to fit in the matchbox or I can't use it for the swap!
What are these little books about? Well, the green one I made that didn't quite work out right is just inchies glued to the pages. I may still add some text, haven't decided on that yet. I discovered in making this book that my markers do not like gesso. So I don't think I'll be writing in the book with markers but will have to find something else that will not smear on the pages. This project will be completed by the end of my day. The matchboxes might not get done so soon, but the little books will. I have to make a minimum of 2 books for 2 matchboxes. I will probably make 3 of them so the host has one to keep for herself. That's not required, but always appreciated.
I traded 3 ATCs day before yesterday. Old ones that had been on flickr forever! They went in the mail yesterday, headed to NY, USA. I have 6 bird inchies that need to be put in a envelope and sent off as well. I need an address to send those to though....
Really not a whole lot happening in my world. The van won't start cause it's too damn cold out for it to start. I think it might be in need of a new battery. It really doesn't matter that it won't start. I can get a ride to town if I really need to go to town. Which, today, I don't need to go to town cause I was just there yesterday. I borrowed Susan's little red car for that trip.
I hope you all are doing well in the new year. Don't forget to collect your hugs, give a few kisses and just generally be happy! Life is way too short to waste it on negativity and being mean.
I shall post again soon!
Peace
831
Posted by Donna at 4:32 PM