I wasn't home much yesterday and when I was home, I was visiting with my youngest son or sleeping.

I must give you all fair warning that this post contains MALE NUDE DRAWINGS so if you're adverse to looking at naked men (and women) you might as well just back on out of here for the day.

I can't say, cause I don't know, why I decided that nakedness was on the drawing board yesterday, but it was. I'm quite pleased with my efforts to draw nudes. People are not one of the things I draw well. Not usually. I was on a roll with these fellas though.

We won't start off with nudes right off the bat. I'll show you the elephant I drew with my seven year old grandson last night. He drew all kinds of things. But he didn't draw anything on the ATC blanks I gave him. He said those pieces of paper were too small. :) So his are all on scratch paper from my stash for making pages for 'throw-away' notebooks. 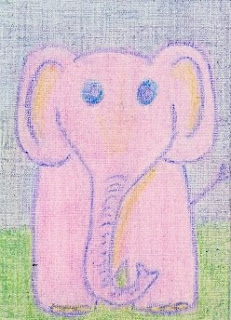 I'll be keeping this one for myself. It will end up in the big frame that will eventually hold 44 elephant ATCs. I seldom draw elephants but I collect elephants of all shapes, sizes and materials. My herd is about 300-350, might be more than that...I don't know, I've never counted them since the fire. I lost a lot of elephants in the house fire five years ago. My herd was close to 600 strong then. People give me elephants all the time though so the herd has grown. The big frame will house quite a few and it will look fabulous on my livingroom wall once I acquire enough elephants to fill it! If you would like to help in that endeavor, leave me a message with a way to contact you and I'll get back with you. I will trade art for elephants!

I thought about using this fellow for my ATC for the 365 Project for yesterday, but he's not my favorite of the day, so I went with this fellow instead: 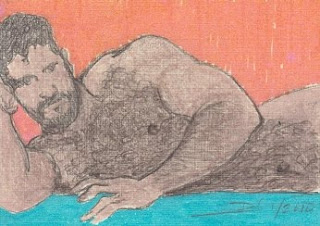 Drawn from a photograph.

I amazed even me with this guy! My people don't usually turn out so well. The combination of markers and graphite pencil surprised me also. It was an experiment of sorts. I drew the man in pencil and was going to leave him at that. I sprayed the drawing with Krylon Kamar Varnish to set the pencil so it wouldn't smudge. I gave it a couple coats, drying time in between. Blue and orange were my colors of the day and this fella just begged to have some color on him. I wasn't certain the markers would play nice with the varnish but it's just a drawing (practice, practice!) so I went for it! The markers played wonderfully with the varnish! The pencil still smudged a little, but it worked well, gave him a nice skin texture.

I'll be keeping this fellow for my man collection of ATCs. 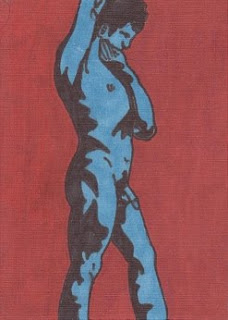 This image came from a google search. It is a stone sculpture. Not sure who sculpted it though, it wasn't labeled. I liked the way the shadows played on the print out and used them to advantage. Why blue? It just happened that way. I don't over think things when I'm drawing...I just go with whatever the muse says to do. She wanted blue people, so I made blue people.

I've not decided if I will trade this one or not. 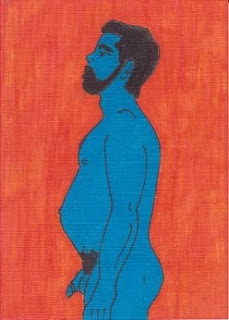 I love that this fellow has a pot belly. Not all humans have flat stomachs! Just a simple line drawing, colored blue with an orange background. This fellow will be for trade once I get him posted in my gallery over at AFA. He came from a google search as well. 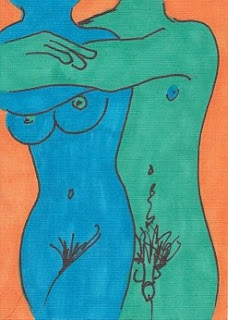 Drawn from inside my head.

My drawings are always much better when I have something to look at to reporduce in my own hand.  This is the end of the nakedness for this post. I can't gurantee there won't ever be another nude to show you all. I may get the mood to draw naked women next time. Who knows!

I spent the afternoon with my brother at his house watching a movie and just hanging out. My little brother (he's 41) isn't a very social man. He prefers his own company to the company of others most often. I get along great with the boy! We are a lot alike. I am not any more social than he is! We watched The Pelican Brief, had roasted chicken and played with his little terrorist (aka kitten). Then I came home around 6 pm. My youngest son called to say they were headed over so Lue could do some work on the pc. She's taking tests for her job. When she completes the tests, they'll give her a 50 cent raise. I was happy to let her use my pc as they don't have internet at their house. They only brought one of the boys with them. Gabe. The others stayed at Lue's grandma's house. They have four boys. Gage, Gabe, Grant and Gravin! I can tell you it took me forever to get all those boys' names straight! None of them are my son's children, but that doesn't make them not part of this family. They are my grandsons!

I was already in my bed, almost asleep when they were headed out the door to go home. I wanted to stay awake till they had gone, but the old eyeballs refused! The fibro was kicking my butt again yesterday. Had no energy at all. I really didn't get much accomplished yesterday other than going to the grocery store, the dollar store and to get smokes. I had to hit the grocery store, the cupboards were bare and the dollar store was necessary cause the cats and dog were out of groceries as well. I wanted to go to Hays to get dog food but I couldn't get anyone to go to Hays with me so I went a different route for Fred's food. I'm not sure if there is a trip to Hays planned today with Susan and Linda or not.. If there is, I'll be going too and will get Fred a bag of his regular food. He doesn't really like Dollar General dog food even though he will eat it.

It's still early on Saturday morning so nothing has happend yet today. It's kinda chilly this morning, looks like rain out there. I'm having my morning coffee, reading up on the blogs I read daily and just trying to get going this morning. My arms are quite painful and I have a bit of a headache this morning. Hopefully the arms will straighten up and the headache will move on before the morning is done. If not, I'll probably be back in bed before the day is out. I hate the fibromyalgia when it flares up. There is no rhyme or reason to it! One shouldn't feel like crap after one has had a good ten hours sleep. I slept like a rock! I should feel refreshed, not still tired.

I'm out of here for now. Get your hugs! Give some hugs! Share a few hundred smiles today too! Everyone you meet is in need of a smile even if they don't appear to be in need! Give them one of yours and they are quite likely to exchange one of their own! Have a fabulous day!

You did a wonderful job! Great cards, I like the couple! Probably because it's the 'different' one in the set, but all are just gorgeous!

i think your nudes are superb, but the ellie is the best, i love ellies too as i was born and grew up in africa, but my best is still 'raffies'.love your art on this project.