I didn't get to post on Friday cause I wasn't home much on Friday and when I was home, I forgot to show you Friday's ATC. So, we'll just go from here and catch up somewhat.
I seem to be producing a lot of art these days, much more than a single ATC each day. That's a good thing though. All Good! 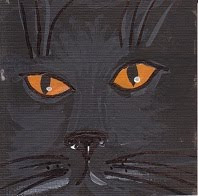 Black Cat with Orange Eyes
Twinchie
15 January 2010
Acrylics on recycled cardstock.
I told you all about the kitties my sister wanted to make pendants out of. This twinchie is one of those. I have one more to make. That one will be made later this morning. It will be a gray cat with green eyes. 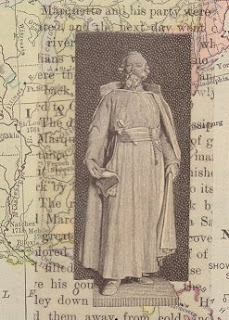 CAT
16 January 2010
Marquette-Discoverer of the Mississippi River
Collage on recycled cardstock (two layers of cardstock cause I can't spell Mississippi sometimes). Map, packing tape transfer text and a picture of Marquette from a
1901 American History Text Book.
This one and the next ATC are for the Collage-a-thon (CAT) going on over at AFA (link in upper left hand sidebar). 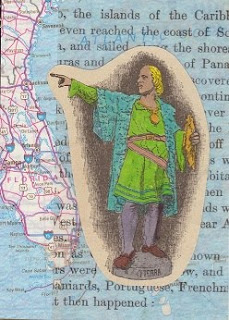 CAT
Christopher Columbus
Collage on recycled cardstock
Modern map of eastern US seaboard, packing tape transfer of text about Columbus from a 1901 American History book and a picture of Columbus colored with markers from that same book. 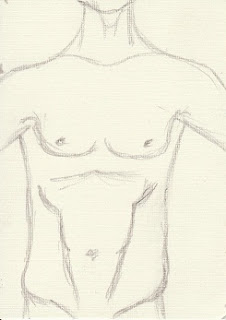 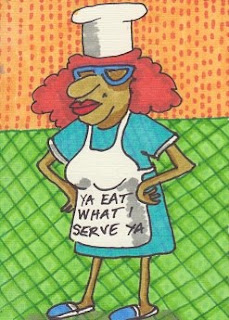 Cook Hilda
15 January 2010
Markers on recycled cardstock.
I got the idea for this drawing from an icon posted in the yapping thread. I just had to try to draw her! I named her Hilda, not sure what her name is originally or if she even had one! She's got attitude and attitude is sometimes good. I always insisted my children ate what was put before them when they were growing up and I'm sure some days they thought of me as the Evil Cook Hilda who does the same! She's just too funny. 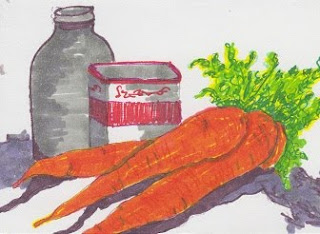 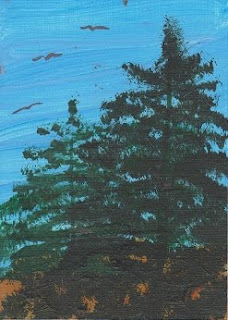 Two Cedars
14 January 2010
Acrylics on recycled cardstock.
I was kidnapped by my brother yesterday. He showed up around 9:30 a.m. and insisted I needed to get out of the house. So I got out of the house and went to his house to a movie. Extreme Measures. It was a pretty good movie. Had been quite awhile since I'd gone to see a movie with Sammy.
I'm out of here for the time being... I have more collage cards to make for the CAT this weekend. You all will be seeing more art before the weekend is over. Whether it's good art or not is up to you to decide! And while you all are making up your minds, I'll be making even more art! I do believe Andy Worhol is quite correct that it is up to others to decide if what you create is any good or not! Though I am quite aware some of it has more merit than the rest does. That's why it's important to keep on practising!
So, I'm off to practice!
Get your hugs. Give some hugs! I'll be collecting mine later today when my youngest son and his clan show up for a visit. Should be fun with four little boys in the house. Five if we count the youngest son who sometimes acts like a little boy..... you all have a good one! I'm going to!!!
Peace
831
Posted by Donna at 4:44 AM

Wow, you have been some kind of busy! I love the Marquette collage, the still life looks stunning and the last card...the trees, are just gorgeous! Beautiful work Donna!!

Isn't it great when the art just seems to keep flowing?! Love that carrot still life. And your cats are always very nice.