No Art At The Moment

I got home from Kearny, Nebraska bout an hour ago. We left at 6:30 this morning and pulled back into Stockton at 7:30 this evening. It has been a harrowing day! 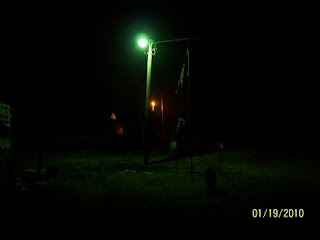 This is how it started out. Dark, damp and cold.6:30 a.m. Poor Fred had to stay out all day. Though I'm not sure if the weather I experienced today was the same weather as what Fred experienced. I just know when I got home 13 hours later, that dog was ready to come in the house and he let me know it by barking his fool head off. 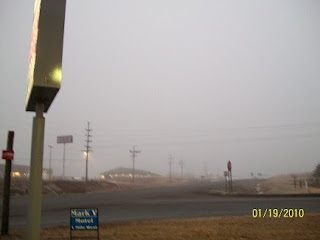 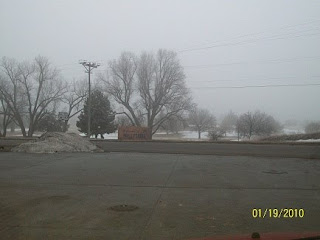 The trees are coverd with frost and there's drizzle coming down. Not freezing drizzle, thankfully. Just drizzle. 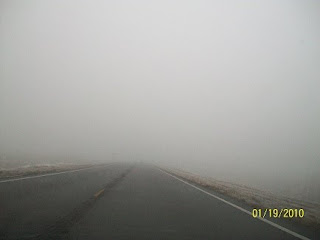 Twenty minutes later, ten miles or so north of Pburg. The fog is like pea soup and getting thicker by the mile. 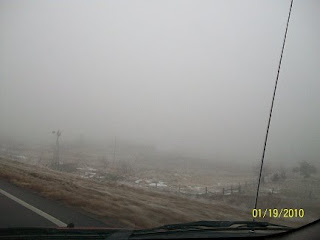 We were travelling along about 50 mph in a 65 mph zone. Others were going just as slow as we were. In some spots we drove much slower, but never much faster than 55 mph. Beyond the fog are hills and bluffs. 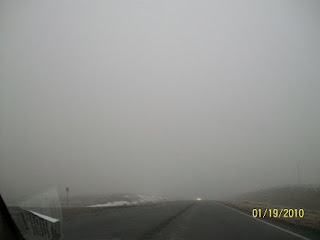 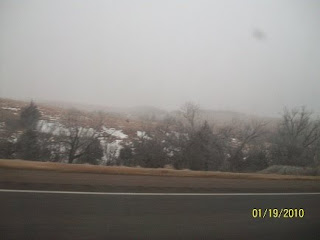 Ok, it does clear up a tad every once in awhile. This is out the driver's window. I didn't look to see what I was taking a picture of. I kept my eyes on the road and one hand on the wheel. The trees were so pretty! They got a bit more snow to the north of us than we got and there's still a lot of it out there. 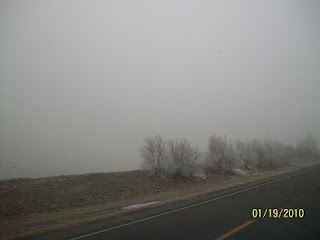 This picture shows a decent representation of how pretty the trees were. But it lacks that sparkle present in real life. Even though the sun was having a lot of difficulty shining, there was sparkle on the trees in places. 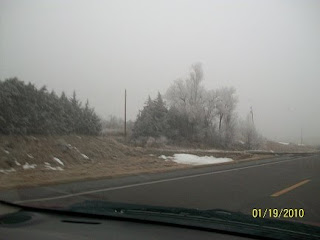 Another good shot of what the trees looked like. The fog has cleared a little bit. We hadn't yet crossed the Nebraska border. We're getting close though. 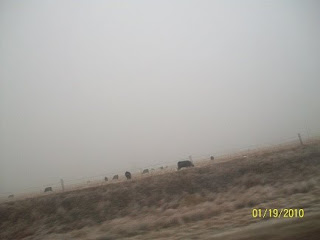 Cows, standing in the fog, eating. Cows are but eating machines. That's all they have their minds on....eat, eat, eat. It's probably a good thing cause if they knew why they were eating all that roughage, they might not like eating quite so well. I feel sorry for the cows in the winter. They seem oblivious to the weather though. 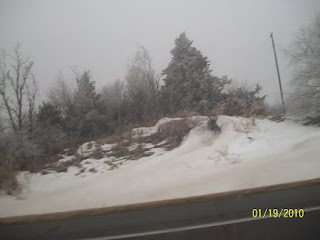 Now we are in Nebraska. Look at all that snow. It wasn't like this everywhere thankfully and the roads were rather clear except for being wet from the drizzle. Traffic was light for the most part on the morning drive. 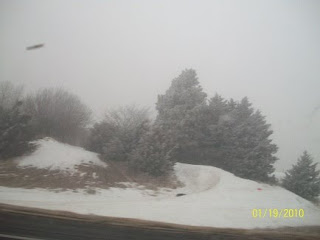 Another big drift. These two pictures came out surprisingly well for having been taken while driving down the highway. I sometimes surprise myself! :) 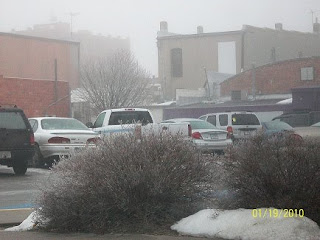 We pulled into Holdridge about a quarter to nine. These are the bushes next to the thrift store in Holdridge. The tall building in the background that you can't see very well because of the fog is only a block away.

I bought a few books and game. I wanted that movie camera but the price tag of $3.00 wasn't the actual price they wanted for it and they refused my offer to pay the price that it was marked so they still have a $5.00 movie camera to hawk. It was a cool contraption. An old camera, took film about a half inch wide. I wanted it, but I wasn't giving them $5.00 for it when it was marked $3.00. 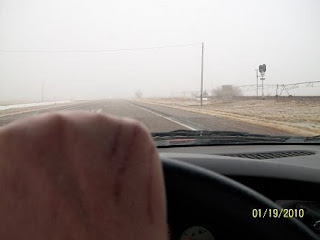 We've just gone through either Funk or Axtill (?) something like that.....still foggy as all get out! Our trip to Kearny is 120 miles (roughly) from Stockton to there. We still have about 45 miles to go from here.

Those scratches on my hand are courtesy of that Lola Kid, aka Terrorist Cat. It hurt like the dickens when it happend about five days ago. Susan took this picture. 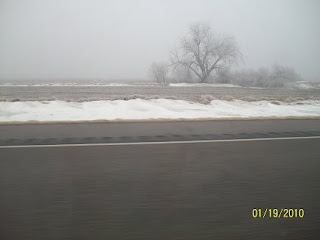 That tree was gorgeous! This picture doesn't do it justice with the ice on it, the chill in the air, the fog shrouding the landscape.....it was gorgeous! 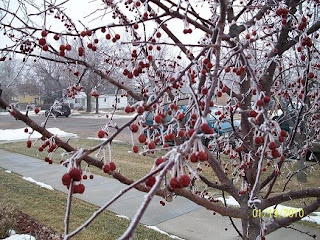 We are in Kearny now. There were lots of pictures taken between Funk and Kearny but I didn't think you all wanted to see too many more trees covered in frost whizzing by on the highway. So I took a picture of this pretty little tree in front of Dr. Saw's office. Dr. Saw is a neurologist I do believe. Susan went to see him for a nerve conduction study. She has moderatly severe carpal tunnel in both wrists. She says her hands aren't what bothers her. It is her left arm and shoulder that bothers her quite muchly these days. 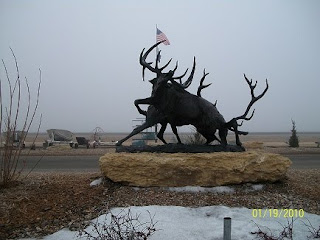 This is the bronze elk statue out in front of Cabela's in Kearny. We had a little time to kill between appts and drove out there and turned around and went back into town. It's still foggy as you can tell from the background. This was about 1 p.m. News cast had said the fog was to burn off by noon. That did not happen. It never burned off. 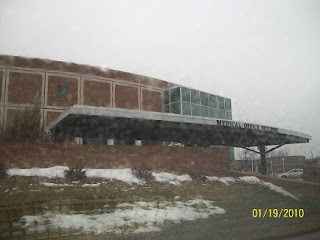 4 p.m., the medical building where Susan went to do her pre-op business. We were dead tired by this time. Both of us cranky and it was beginning to rain and the sun was fixing to go down. I sat out in the parking lot for over an hour after this picture was taken waiting for my sister to return. I drew about 30 inchies in that time. I'll add color to them soon and you all will get to see them. This will be the only reference to art in this post. 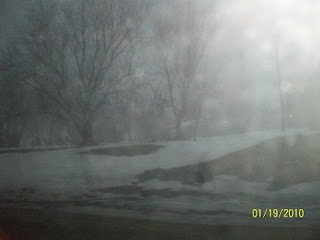 This is the last picture taken on the trip. The sun was going down and Susan was cranky and the flash went off and it didn't work too well with the window between the scene and the camera so she shut the camera off and said, "It's too dark to take pictures." And she was right. It was too dark, too wet and there was way too much traffic to be shooting the camera with the flash going off.

We made it home in one piece and that is all that ultimately matters. Please don't make me drive in crappy weather again anytime soon!

We didn't think we would be in Nebraska as long as we were. We figured come 4 p.m. we'd be back home again. I don't see well in the dark and I really shouldn't have been driving in the dark AND the rain and fog. But someone had to get us home. Susan cannot drive. She simply can't. She's wearing a neck brace and her arms just don't work like they should and she's in a great deal of pain. Was safer for me to drive than for her to drive. We call this running around in the dark business...the blind leading the blind. I've never been so happy to see the lights of Stockton as I was this evening!

I hope you all got some hugs today. I didn't. But some days you just don't. I did get a few laughs and I had chinese food for lunch so all is good! All is good!

I'll bet you're worn slap out! I gotta admit, Donna...I loved looking at your photo-journal for the day! Beautiful photos!

Hug Fred, I bet he's glad to be inside with you!